Why Can A “Tantrically Trained Man” Last So Long? All of my life I have heard men say that they felt tense and that they had to “let of steam” (i.e. ejaculate), as if this were the most natural thing in the world.

And as a man you probably feel like sex many times during a day or at least many times a week, and if you don’t get any sex you probably experience pressure building up in the pelvic area and a desire to get rid of that pressure.

All of this perfectly normal …

But what if I were to tell you that there was a better alternative than “letting of steam”?

It is the most powerful energy in your whole being – it is your very life energy Your “Libido” or “drive” as Freud called it.

This life energy is stored in the semen – and when you ejaculate it out of your body you lose a HUGE AMOUNT of energy.

Instead this sexual energy can be re-circulated in your body

This calls for a more in depth explanation …

You can choose to see the sexual energy as an energy that is stored in a container – a container that is placed in the pelvic and genital area.

There are two openings in this container. One leads out through the genitals. The other one leads out to a channel that runs up the spine.

When a man trained in Tantra is making love he is continuously channeling the sexual energy up the spine.

In this way he creates a flow of energy so that pressure is not accumulated in the container, a container that otherwise would explode.

This ability allows this kind of man to last for hours in bed.

Any man can learn to do this, and become what I call a “sexual energy manager” – a man who masters his sexual energy. Instead of accumulating energy and building up “steam” and pressure that you release through an ejaculation you send the energy up your spine in this way distributing it in your whole body. By doing this you will attain perfect mastery over your sexual energy and as an extra side benefit you will also experience deeper and more satisfying orgasms than the few seconds of measly pleasure that usually accompany an ejaculation (in other words, why go for a few seconds of second grade pleasure accompanied by tiredness and the guilt feeling that follows, when you can energize your whole body, get multiple orgasms and feel AMAZING after sex. Its a complete no-brainer).


But how do you do this?

Instead of falling of the surfboard when the wave hits, the tantra man rides on the wave of sexual pleasure. He does this for as long as he wants … while giving her one orgasm after the other.

The problem is that many men suffer from the following:

These factors can block up the channel in the spine that allows the sexual energy to pass upwards.

The sexual energy which accumulates during arousal has thereby no way to get out – and so the pressure rises in the container eventually leading to ejaculation.

If you have problems coming too quickly, its because the pressure in the container builds up too quickly and the body sees no other way out than to let it out with an ejaculation.

Therefore its important to PREPARE THE BODY to surf on the waves of pleasure. You can do this through different exercises that teach you to channel your sexual energy upwards instead of just accumulating and releasing pressure. It could also be necessary to work with specific acupunture points if the energy is very blocked, especially if you suffer from premature ejaculation.

But first of all its training to have the proper mindset.

If you are interested in how you can learn to control your sexual energy and to rise it up your spine, then go check out the TantraCURE 12 week stamina course.

==> Check out the TantraCURE program by clicking on this link 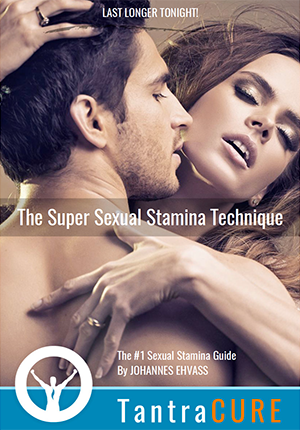